Season of Mist are proud to announce the signing of Dutch psychedelic rock ‘n roll formation Molassess. A new full length will be released in the fall of 2020.
The band, featuring four musicians from The Devil’s Blood, was beckoned to life as a commissioned performance for the 2019 edition of Roadburn Festival. Yet Molassess is not a continuation of a buried past, nor a celebration of a cherished collaborator, but a culmination of heartache, requisite resolution, a rediscovery of rage and the relighting of a fire that never really burned out.”
The Dutch six piece comments on the signing: “This newborn beast is growing vastly within us. Calling out in ways yet to explore. We are excited to become one with its ever expanding language the coming years. We will be its best host possible, together with our newly formed alliance. A call for adventurous spirit is reaching out its formless hands, moving forward in blatant celebration of the irrational. We are more than ready to surface and start pouring out this cosmic glue over mind and matter. Drunk on Molassess!” 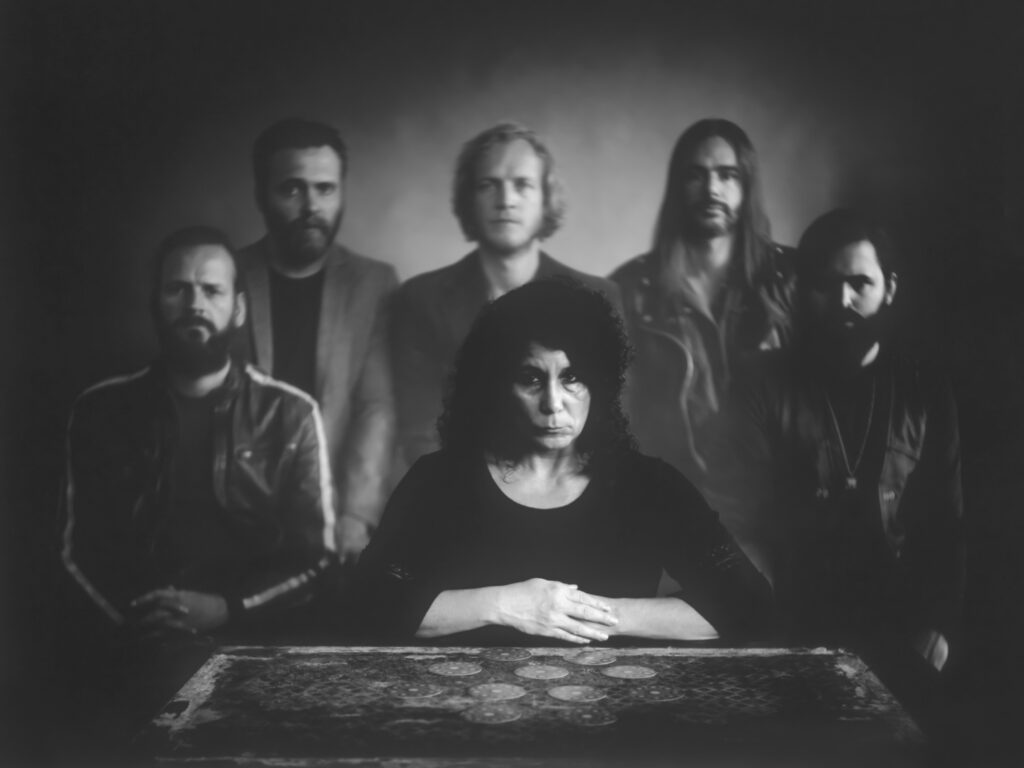 Something is boiling and there will be more!
Bookings: Luc Favié Doomstar Bookings
Management: Michelle van Oorschot

It’s been five years since The Devil’s Blood – a chaotic coterie of musical misfits lead by the efficacious guitarist Selim Lemouchi – ended their feverdance, and yet the elements have started to stir once more.
The Devil’s Blood’s supernal singer Farida Lemouchi has formed new bonds with old cohorts Oeds Beydals, Job van de Zande, and Ron van Herpen alongside Marcel van de Vondervoort (Astrosoniq), Bob Hogenelst (Birth of Joy) and Matthijs Stronks (Donnerwetter) to form Molasses.
Taking their name from the final song on Lemouchi’s solo EP ‘Earth Air Spirit Water’ – and tragically his last mortal offering before his death in 2014 – Molasses are not a continuation of a buried past, nor a celebration of a cherished collaborator, but a culmination of heartache, requisite resolution, a rediscovery of rage and the relighting of a fire that never really burned out.
Molasses were beckoned back to life as a commissioned performance for the 2019 edition of Roadburn Festival – an annual saturnalia that has been home to the musicians of Molasses since The Devil’s Blood first stepped onto the hallowed stages of the 013 in 2008, through their many guises and musical off-shoots, including an unforgettable tribute to Lemouchi in 2014 in which surviving members of his band Selim Lemouchi & His Enemies performed his music in his memory.
This invitation inspired new shoots of creativity to blossom where death had walked. Not a reunion, but a confirmation of deep binds and steadfast connections, much like the substance of their namesake – deep and all-consuming, and impossible to untangle. Thick like thieves, and stuck together through time, grief and experiences shared, Molasses are an unbreakable pack. “The whole idea of molasses is that it’s letting go, but real slow and it always keeps sticking,” explains singer Farida Lemouchi. “You never can really let go. You have to embrace it, and you have to stop and think with it. But you can still move on. There is a time when you stand still and then you sink a bit deeper. And then you wake up one day and you’re stronger and better, and then you take next steps.”
While The Devil’s Blood became one of the most revered and imitated doom bands of the decade, Selim Lemouchi & His Enemies turned the head of the beast that gave birth to the burden of infamy by playing by his own rules, showcasing a resolutely rebellious amalgamation of prog, jazz, heavy metal, experimental noise and pounding, maddening soundscapes. Lemouchi may have chosen to end his life, but the legacy of The Devil’s Blood found its way into new bands and collaborations including Death Alley, Dool, Gold, Griftegard, Urfaust, and Gg:ull.
And now through Molasses a circle is complete once more through the coming together of a tribe that had been torn apart but found their moment of reconnection. “It is exactly the right moment,” confirms Farida. “Everyone was so ready, and then this opportunity came along to create new music for Roadburn. And we’re really thankful. We’re together again now and we’re something new. We’re moving on. This is really important for us. Molasses is all about letting go, and it’s time. It’s time.”
Words: Louise Brown